Open source is at the heart of everything Great Scott Gadgets does. When we design hardware, we publish the KiCad design files, firmware, and software under open source licenses. We try to ensure the documentation, tutorials, research papers, and videos we publish are openly licensed as well. It is the GSG way. While preparing for this Crowd Supply campaign, we took our commitment to open source even further by ensuring the music used in our campaign video is openly available too.

As we started thinking about our campaign video, we began to wonder what music we should use. While electronica is a traditional choice, I thought we might consider a more diverse set of options, including classical or acoustic music. I started my search by investigating music inspired by the moon.

I looked through a list of moon songs for ideas but decided it would be too much of a hassle to get rights for a popular song. Then I looked at a classical list and realized I had sheet music for some of the pieces. I sat down at my piano and tried to play a few. Straithe was listening, and when I started playing Debussy’s Clair de Lune she immediately said, “Use that one.”

Shortly thereafter, I suggested Clair de Lune in a planning meeting with Elizabeth and Kate. They both thought the idea had some merit, but neither was excited about it. Elizabeth ended the debate by volunteering to take on the challenge of editing the video and making the final music selection.

A few weeks later, Elizabeth shared a draft video with us, and I was pleasantly surprised she had used Clair de Lune for the music! She said she had investigated a number of other options but kept coming back to Debussy. Although she didn’t favor Clair de Lune for the video at first, it was a piece of music she had always loved. The idea of accompanying LUNA with beautiful music inspired by moonlight grew on her. Unfortunately, we didn’t have rights to use the recording in that draft. We looked around for royalty-free options but couldn’t find any we liked.

At this point we briefly entertained the option of making our own recording. At least three of us in the company were theoretically capable of doing so, but it would have taken a lot of work. Practicing, tuning a piano, acquiring recording equipment, and setting it up would have required several days of effort before even starting the actual recording and editing. We felt it was more important to spend our time focused on LUNA development and preparation for production.

Then it occurred to me: We could hire my brother, David O. He’s a professional musician who could probably record the entire piece in one day. Normally most of his work is in musical theater, but during the pandemic musical theater hasn’t been a thing. Small gigs like this are more important to him now than they have been in the past, and we liked that our project would help support an artist. Additionally we realized we could pay him to release the recording for others to use! Great Scott Gadgets is not in the music business, but, as long as we were producing music, we wanted to do so in the most GSG way possible.

David considered recording with an acoustic piano but decided to use a digital keyboard instead. This process allowed him to edit nuances of his performance such as the timing or velocity of a single keypress and to share his work as a MIDI file. This appealed to the Great Scott Gadgets team as it is in the spirit of the Open Source Hardware Definition which requires design files to be published “in the preferred format for making changes”.

Please enjoy and use his recording, a portion of which is used in our video. In addition to the audio track, he has released the MIDI file that can be edited in sequencing software. When you listen, imagine the beautiful light of the moon or of the LEDs on LUNA!

As community manager for Great Scott Gadgets, one of my favourite tasks is finding answers to questions that come in through email, Twitter, GitHub, and Discord. Thankfully you all are great at asking questions, especially about the USB Type-C connectors on LUNA! In this blog post Michael Ossmann responds to most of the USB Type-C queries I’ve received (and asked) about LUNA in the last few weeks. 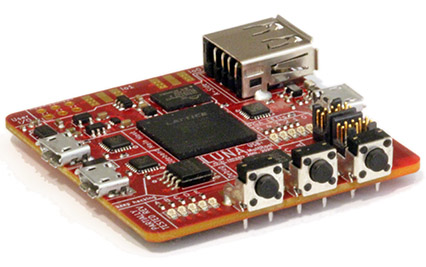 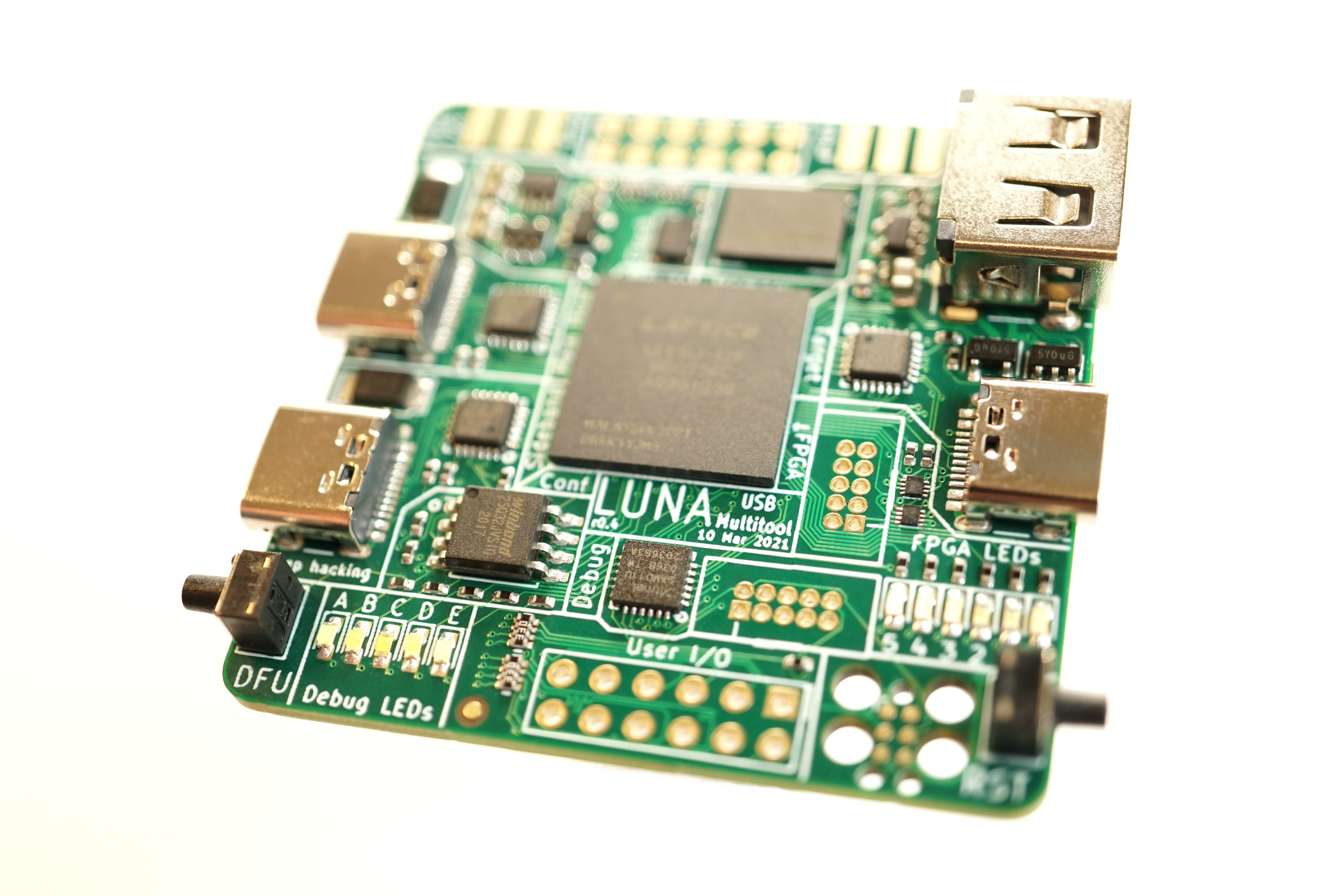 Kate’s original LUNA design used Micro-USB connectors, but we decided to switch to Type-C connectors a couple of revisions later. Based on the USB specification, Micro connectors may be the best choice for LUNA, but I don’t know anyone who actually likes them. They can be difficult to insert properly and they are less reliable than other USB connectors. Maybe the best thing about them is that the cable that tends to wear out and not the receptacle.

Straithe Question: So other than likeability, are there other reasons USB Type-C connectors were chosen?

Type-C connectors are more robust and easier to insert than Micro-USB, particularly since they function when inserted in either orientation. They have become quite common, so we think folks are likely to already have cables. Significantly, Type-C is the only connector specified for the recent USB 3.2 and USB4 standards, so we see it as the most future-proof option in regards to cable acquisition.

Straithe Question: Were there any concerns about switching to USB Type-C connectors?

Our biggest concern about switching to Type-C connectors was that it might give a false impression that LUNA supports SuperSpeed USB, often referred to as USB 3.0. We’ve noticed more and more USB 2.0 devices with Type-C connectors over the past couple years, so our hope is that few people would be confused by this.

Community Question: Will LUNA be able to support SuperSpeed with software changes?

No. A Type-C connector can be used on a USB 3.0 device for SuperSpeed, but it can also be used on a USB 2.0 device such as LUNA at Low-speed, Full-speed, or High-speed. Although the LUNA software framework includes some experimental support for SuperSpeed USB on alternative hardware platforms, the LUNA hardware platform is a low-cost device supporting only USB 2.0 speeds.

There are four speeds in the USB 2.0 and USB 3.0 specifications:

(Additionally there are extensions of SuperSpeed in USB 3.1 and above.)

Community Question: Does LUNA come with any cables?

Partly because of our switch to Type-C connectors and partly to save cost and packaging, we have decided not to include cables with LUNA. One of the reasons for this is that it is difficult to predict what cables folks will need for different applications. As an illustration, I used LUNA recently in-line on a connection between a PC and a HackRF One. This required four cables:

This particular selection of cables depended on the available ports on the laptop, the PC, and the HackRF One. In order to accommodate most of the combinations we anticipate, we would have to include at least half a dozen different cables, making LUNA needlessly expensive and its packaging overly bulky. Instead we decided to keep LUNA small and affordable by relying on LUNA users to acquire their own cables for their individual needs.

Community Question: Does LUNA pass through SuperSpeed signals when used as a USB analyzer?

To use LUNA as a USB analyzer, you use one cable to connect a USB host to LUNA’s “Target” Type-C port and another cable to connect a USB device to LUNA’s “Target” Type-A port. Both of those ports on LUNA are USB 2.0 connectors, so they only pass through the USB 2.0 data signals. LUNA does not pass through SuperSpeed signals or any of the ancillary signals supported on some Type-C devices such as those used for Power Delivery (PD) communication.

Community Question: I guess LUNA doesn’t have any PD capabilities then?

Although we don’t pass Power Delivery signals through LUNA, the hardware is designed to have some ability to transmit and receive PD signals:

We added these capabilities to the hardware design when switching to Type-C connectors, but we currently do not have a plan to implement gateware for PD. If you have a specific use case for which you would like software support, please let us know. At a minimum it will be possible to implement your own PD solution in nMigen. Note that LUNA’s Type-C ports are not tolerant of voltages above USB’s standard 5 V, so some PD experiments could put your LUNA in danger of overvoltage.

For more sophisticated PD testing and experimentation, including passive monitoring, I recommend checking out Rod Whitby’s USB-PD Add-On for Glasgow currently in development. Rather than adding similar circuitry to LUNA (and making LUNA larger and more expensive), we think this is a great application for a special-purpose design such as Rod’s board.

LUNA’s hardware design also permits 3.3 V I/O on the SBU1/SBU2 signals of all three Type-C connectors. This should enable experimentation with some lower speed Alternate Modes such as those used by some serial debuggers, but it will not support video modes.

Straithe Question: Thank you for answering our questions today. Do you have any last comments?

Thanks for curating these great questions! I just want to give a big thank you to everyone who is supporting LUNA on Crowd Supply. We truly appreciate each and every one of you!

Initially, we planned on creating a laser-cut acrylic enclosure for LUNA. We had started sketching out a design when Michael Ossmann saw the beautiful design work Timon of Diodes Delight did on the milled aluminum case for Glasgow. Mike contacted Timon right away to ask for his design help as we knew a milled aluminum case would be a high quality option, more durable and protective than our original layered acrylic idea. Soon after, Timon accepted our request and started working on a case.

We have worked with Timon on the case design over the past few months, which has been a delight. He did a nice job of shaping the interior to maximize mass and give the case a comfortable (yet light) weight while still accommodating all of LUNA’s components. Timon even found light pipes that suit LUNA’s tightly spaced LEDs, which are less than 2 mm apart! Recently, Timon sent us the following 3D renders, and we knew we had our design. 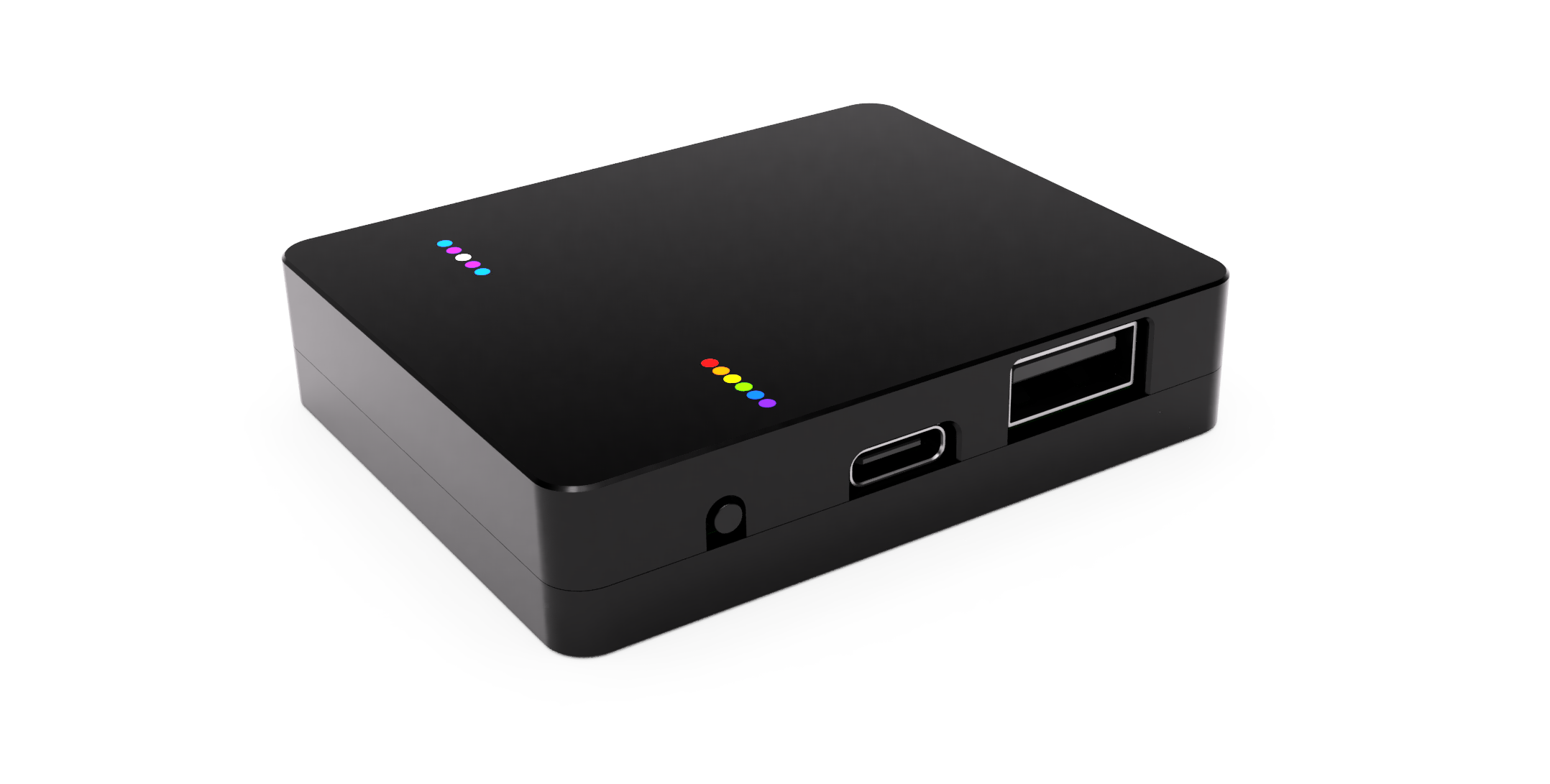 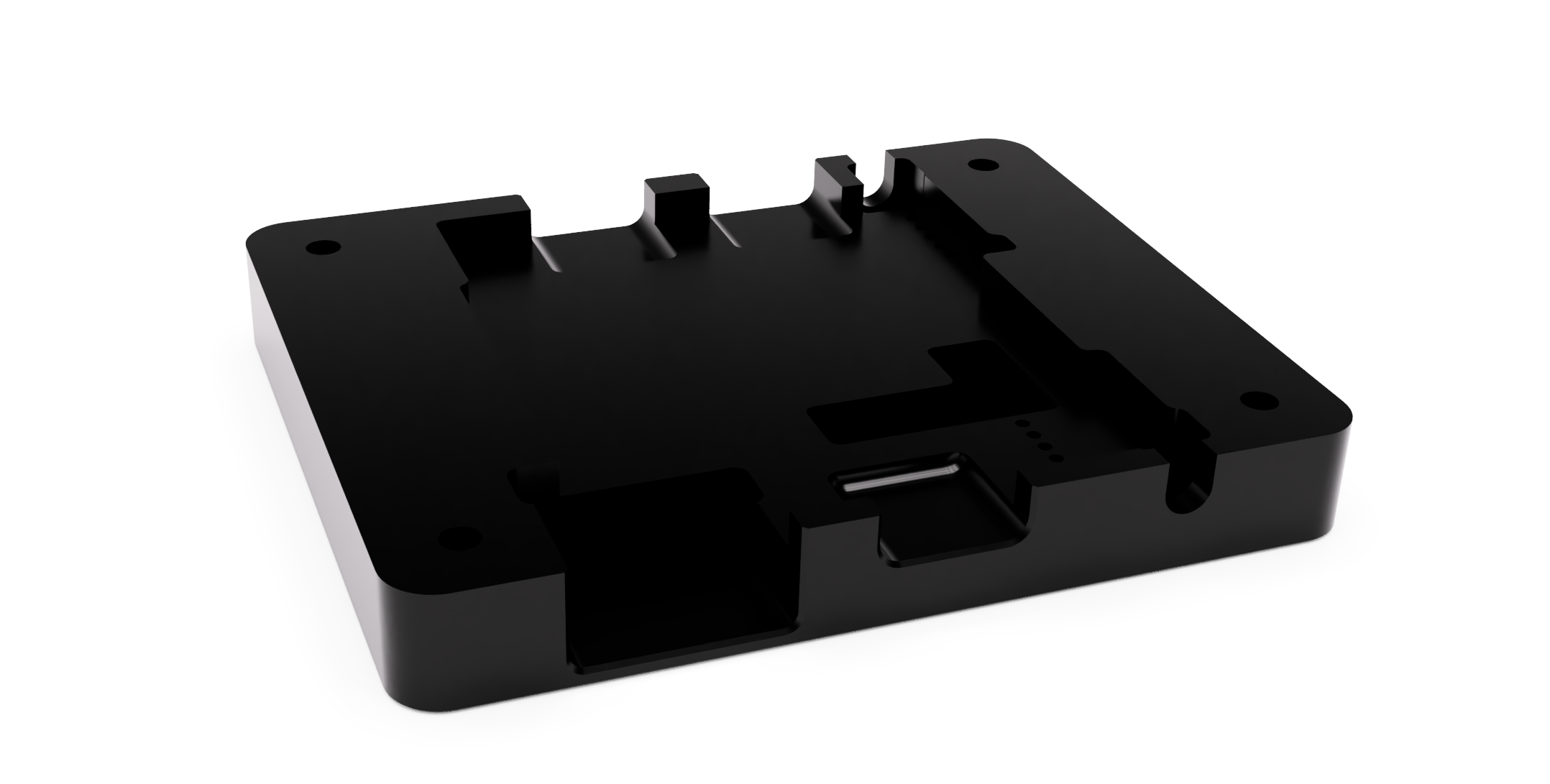 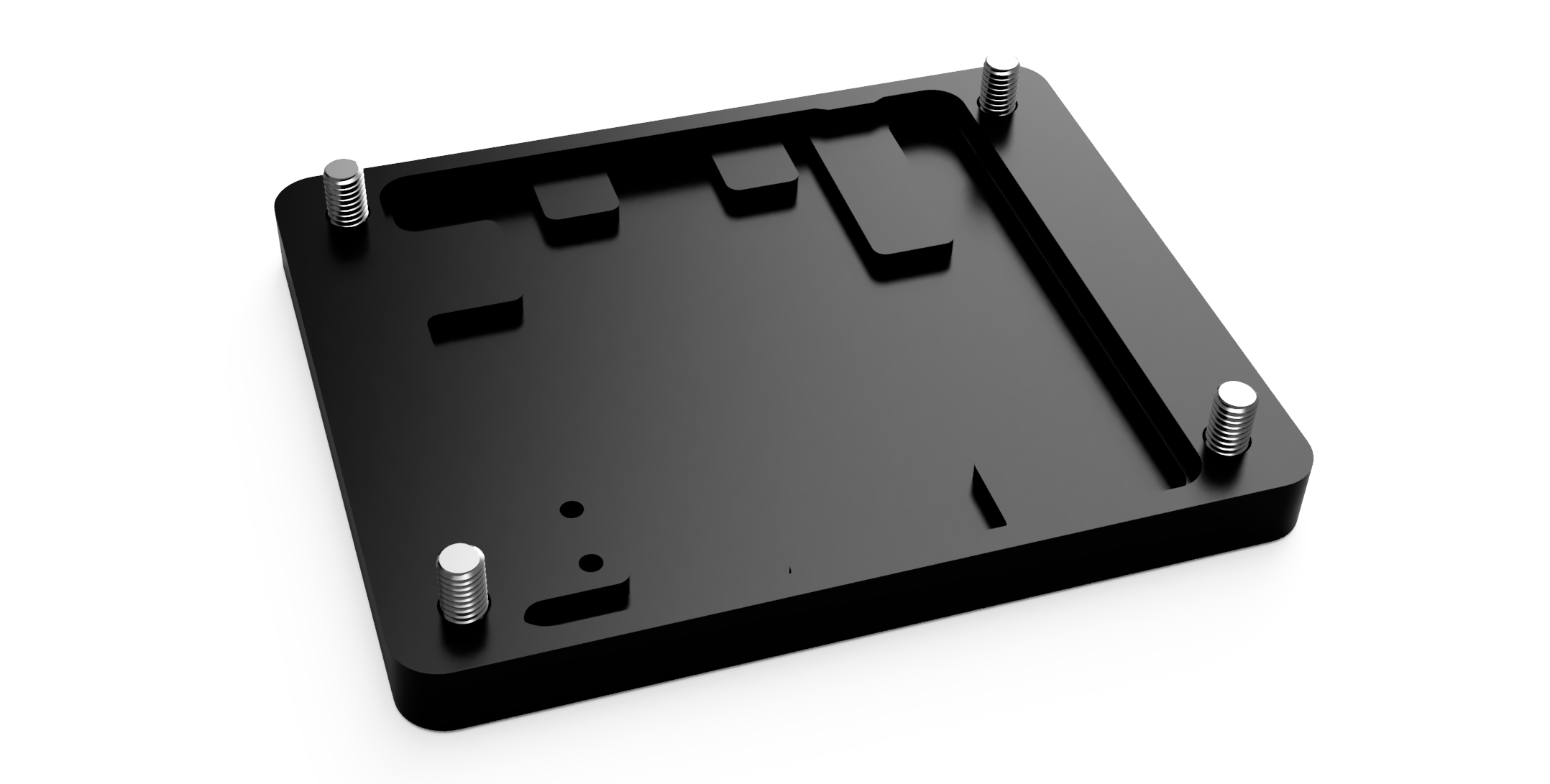 A little over two weeks ago we approached our manufacturers with the case design to get the first prototypes made. In the time since the campaign launched, we have received pictures of the freshly milled top pieces of the enclosure. 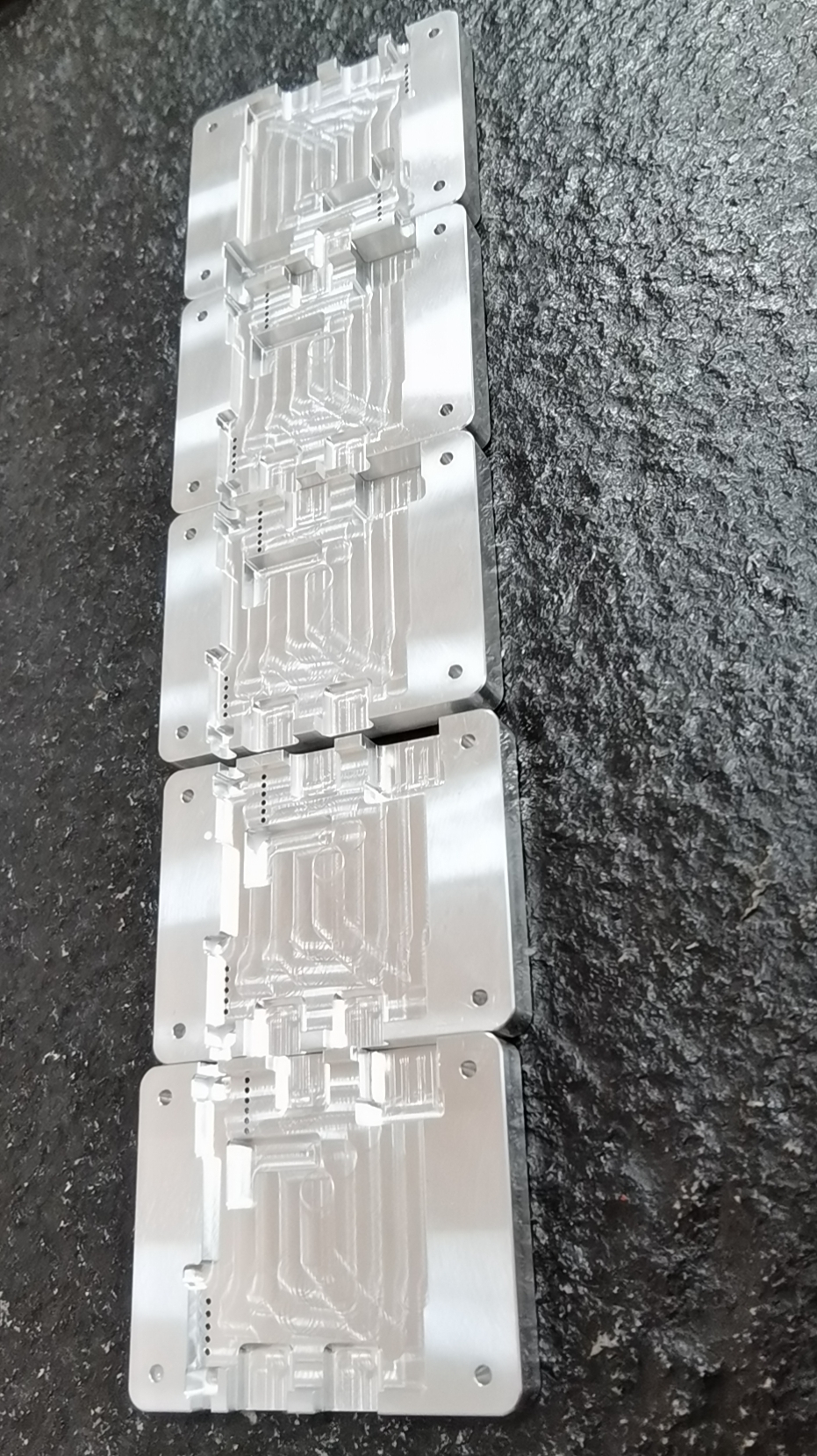 Once milling is finished, these prototypes will be sandblasted, anodized, and laser etched. Sandblasting will remove the tool marks from the interior of the cases, anodizing will coat the aluminum and turn it black, as shown in the 3D renders. Laser etching will add the labels, GSG markings, and other symbols to the case.

We really look forward to receiving these prototype cases soon, testing them, and uploading pictures/updates for you shortly after!

Today marks the day that our campaign to fund LUNA launches on Crowd Supply! Over the next six weeks (from July 15th to August 26th) anyone will be able to pre-purchase a LUNA and support our goal of bringing this low-cost multi-tool for building, analyzing, and hacking USB devices to market. If you want to learn more about LUNA, we have a detailed writeup of the device on our Crowd Supply campaign page that we hope you will read!