“The world of FPGAs has traditionally been full of closed-source mysteries: designs have long been crafted using expensive, multi-gigabyte vendor tools, and the inner working of vendors’ hardware and software have remained closely guarded secrets.

In this series, I’ll ‘show off’ a variety of hardware you can use to develop your own designs using open-toolchains– and hopefully help people to get a feel for the ecosystem.” Read the full post here.

Roy Morris with Gift of Life International asked us for a HackRF One in August. Roy travels throughout the developing world helping children with congenital heart defects receive the medical care they need. He’s going to use the HackRF One to troubleshoot the aging telemetry systems that send medical data to patient monitors.

If you’d like to be considered to receive free hardware from Great Scott Gadgets, please visit the Free Stuff page and send us a message with lots of details about your project.

Chris Kemp asked us for some Throwing Star LAN Tap Kits in May. Chris teaches Forensics at Chavez High School in Stockton, California. He is using the kits in his introduction to digital forensics class, and because he’s such a nice guy, he shared his loot with the computer science department.

Brooklyn Research is an interdisciplinary creative space focused on technological innovation. They provide a platform for established artists, technologists, and researchers to foster engaging discourse and experimentation. One of their groups is going to use their new HackRF One to experiment with finding a way to translate satellite signals to G-Code for a printer which will deposit nutritional paste for a slime mold culture. That slime mold culture will be a pretty artifact/visualization of the satellite signal as it grows and expands based on where the nutrients have been deposited. The shape of the slime mold growth then may be used for experimenting with new antenna shapes.

This week at USENIX three researchers published information about a new attack against classic Bluetooth. Known as KNOB, the attack takes advantage of a weakness in the Bluetooth specification to force target Bluetooth connections to use 8-bit encryption keys instead of larger keys that would be resilient against brute-force attack.

This weakness in classic Bluetooth (not Bluetooth Low Energy) is a big one. I don’t recall seeing such a significant vulnerability in Basic Rate Bluetooth security since pairing was improved with the introduction of Secure Simple Pairing in Core Specification v2.1 in 2007.

One of the things that intrigued me when I heard about the KNOB attack this week was that it sounded very familiar. After chatting with Dominic Spill, we’re pretty sure we discussed the potential for this attack about ten years ago. I’m fairly certain that I had highlighted Encryption Key Size Request in a printed copy of the specification around that time.

What we didn’t have back then was a way to test for this vulnerability. The specification allows for devices to reject key sizes they consider too small, and I guessed at the time that vendors would enforce a more reasonable minimum key size than the smallest (1 byte) allowed by the specification. As demonstrated this week by Daniele Antonioli, Nils Ole Tippenhauer, and Kasper B. Rasmussen, I was wrong!

In order to test this attack it is necessary to modify the behavior of the Link Manager, the part of a Bluetooth chip that creates logical links with other Bluetooth devices. The Link Manager Protocol (LMP) is the low layer protocol that Link Managers use to communicate with one another and negotiate things including encryption for protection of higher layer protocols. LMP messages are not visible over the Host Controller Interface (HCI) that carries information between a Bluetooth chip and an application processor. If you only have the ability to control a Bluetooth chip by modifying an Operating System driver, you can alter behavior at the HCI level but not the LMP level. Ten years ago I was working on creating tools for monitoring Bluetooth signals, and I used off-the-shelf Bluetooth adapters for security testing, but I didn’t have any tools capable of active attacks below the HCI layer.

Last year things changed when Dennis Mantz released InternalBlue along with his award winning master’s thesis. Dennis reverse engineered the firmware of a popular Bluetooth chip and with InternalBlue provided a method to alter the firmware, enabling modification of Link Manager behavior for the first time. Since then Dennis and Jiska Classen have published a series of papers and presentations demonstrating powerful uses of this important tool.

It was InternalBlue that enabled the KNOB researchers to test attacks against key size negotiation for the first time. They used InternalBlue to implement a man-in-the-middle attack that inserted requests for a key size of one byte and successfully demonstrated the attack against nearly every Bluetooth device they tested. This weakness existed in the Bluetooth specification for twelve years, but nobody had tools to test it. Once a tool became available, KNOB was discovered within a year.

Another tool used by the KNOB researchers was Ubertooth One, the open source Bluetooth monitoring platform I designed almost a decade ago. They used Ubertooth One to eavesdrop on encrypted packets in order to prove the weakness of the encryption after forcing a key size of one byte. They correctly point out in their paper that Ubertooth One lacks an effective ability to follow the hopping sequence of classic Bluetooth connections (it is better at this with Bluetooth Low Energy, thanks to Mike Ryan), but they worked around that problem by capturing a single packet and then iterating over all possible clock values to interpret the packet. This ingenuity allowed them to use the low cost Ubertooth One instead of a Bluetooth analyzer costing tens of thousands of dollars.

The KNOB researchers demonstrated that Wright’s Law still holds true after all these years:

“Security will not get better until tools for practical exploration of the attack surface are made available.” –Josh Wright

In the days leading up to the talk, Kate went on a tear, developing ViewSB to complement the hardware solutions for USB capture that she and Mikaela had been working on. I asked, “Why do we need ViewSB when we already have tools such as PulseView and Wireshark?”

Her answer was that the existing open source software tools for USB analysis don’t present data in a way that is useful enough for USB developers. I recalled my past confusion about USB nomenclature and how the most essential thing I learned from Kate’s training class at hardwaresecurity.training last year had been an understanding of the differences between USB packets, transactions, and transfers. Thinking back to the tools we used in that class, I realized that she was right that a new tool was needed. In fact, the limitations of the existing tools were probably largely responsible for my confusion!

As you can see in this video, ViewSB presents low level USB packet data in a visual format that groups packets together into transactions, something that I had previously seen only in software for proprietary USB analyzers. It makes USB much easier to understand. I wholeheartedly agree with Mikaela and Kate that their work makes USB accessible!

Code used in the presentation can be found in the usb-tools organization on GitHub. 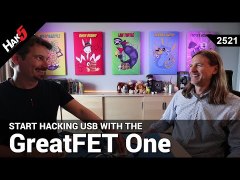 More students! The TARDIS Team from Sapienza University of Rome, Italy was selected for the REXUS/BEXUS program. The German Aerospace Center (DLR) and the Swedish National Space Agency (SNSA), in collaboration with the European Space Agency (ESA), jointly allow students from universities and higher education colleges across Europe to carry out scientific and technological experiments on research rockets and balloons.

Their experiment, named TARDIS (Tracking and Attitude Radio-based Determination in Stratosphere), will be launched on a balloon in October from Kiruna (Sweden), reaching 30 km of altitude. The experiment’s main objectives are to determine the position and the attitude of the balloon by digital processing of VOR navigation system signals.

And, yes, their acronym, TARDIS, may have influenced our choice this month!

More students got free stuff in March. The University of Split - Flow Design Team makes autonomous drones and will use their new HackRF One to improve their score in competitions. They will be competing in the AUVSI SUAS again this year. They won the Most Stubborn Team Award last year!

HHSec received an Ubertooth One as the Free Stuff recipients for February. They are a group of students from the Hague University of Applied Sciences and plan to use it in their IoT research. They look like an enterprising team and we are happy to encourage them.