One of the most difficult aspects of talking to people about Bluetooth packet sniffing is what my university supervisor called “motivating the problem”. What he meant by this was trying to convince others that the problem which you were trying to solve was really as hard as you know it to be. 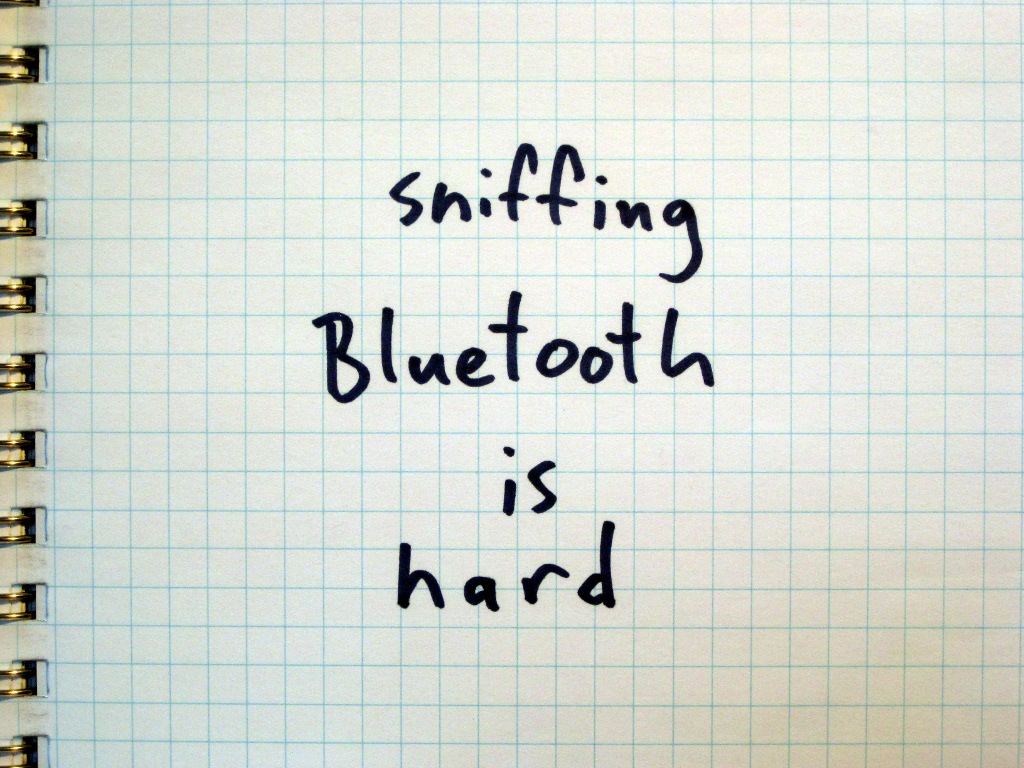 Over the past five years we have dedicated a lot of time to motivating the problem when we give presentations on Bluetooth security, often resulting in glazed looks from some audience members. This post is intended to go some way towards explaining the challenges facing our project and to encourage anyone interested to participate.

Bluetooth packet sniffing falls foul of the motivation problem because it is so often compared to other wireless protocols that appeared at around the same time, such as 802.11 and Zigbee, which had promiscuous packet sniffing solutions available, using commodity hardware, soon after their release.

Another reason that Bluetooth sniffing is hard to discuss is the set of terms that need to be defined before we can even begin to describe the problems involved. At a minimum, the following are useful to know before entering in to a discussion about Bluetooth packets:

Piconet - A personal area network with one master device connected to potentially many slave devices.

Master device - The device that defines a piconet, often but not always the “smartest” device, e.g. a PC or phone.

Slave device - The device being connected to the master, e.g. a keyboard, mouse or headset.

Bluetooth Device Address - A 48 bit unique device address, usually shown in the same format as IEEE 802 MAC addresses and issued from the same address space. It is common for smartphones to have consecutive Bluetooth device and wifi MAC addresses.

UAP - Upper Address Part. The third byte of the device address. Forms the organizationally unique identifier when combined with the NAP.

LAP - Lower Address Part. The lower three bytes of the device address, assigned by the manufacturer.

CLK27 - A 27 bit counter that increments 3200 times per second and wraps in slightly less than 24 hours. Every device maintains an internal clock value, although we are mostly concerned with the master device’s clock. Often referred to as “the clock”.

AFH Map - Adaptive Frequency Hopping allows Bluetooth connections to avoid using noisy channels, such as channels that overlap nearby wireless networks. The map specifies which channels are available for a given connection.

The feature of Bluetooth that makes packet sniffing so hard is frequency hopping. Originally designed to ensure robust connections, it causes more problems and confusion for packet sniffers than any other feature. The pseudo-random hopping sequence that all devices within a piconet share is determined by the LAP, UAP and CLKN of the master device. To have any chance of extracting useful data from a Bluetooth connection we need to know these three values.

The situation gets even worse for encrypted links. To have any chance of sniffing the pairing process, and using the extracted data to find the pin (see: http://www.eng.tau.ac.il/~yash/shaked-wool-mobisys05/index.html ), we must know these three values before the target devices begin to communicate.

One solution to this is to begin sniffing all traffic in a target piconet on the assumption that a new device will be paired with it in the future. In many ways it is good that this is not a practical attack vector, however it makes research and investigation in to Bluetooth authentication and encryption a harder task.

Devices that support Bluetooth v2.0+ also support adaptive frequency hopping (AFH), which adds an additional variable to the list that we have to find before we can monitor a connection.

The Ubertooth tools passively monitor each channel in turn to find piconets and build up information on the LAP, UAP, CLKN and AFH map, this behaviour can be seen in the Kismet plugin. Ubertooth-follow is the one exception to this method as it uses a Bluetooth dongle to acquire the values that the Ubertooth needs to follow a hopping pattern.

Hopefully this has provided a crash course in Bluetooth packet sniffing for anyone who wants to get involved or try out the Ubertooth tools. We’re working hard to improve the amount of data that we are able to collect as well as adding features such as packet injection, Bluetooth Low Energy support, integration with external tools such as Wireshark and Kismet and support for more low cost embedded platforms such as ARM (raspberryPi, BeagleBone) and Android.