It’s happenning! We started shipping GreatFET One to resellers last week, which means that very soon (probably even today) it will be available for you to order online from your favorite reseller of Great Scott Gadgets products. Hint: if your shop of choice doesn’t carry it yet, let them know you’re interested!

It was January of 2016 when Mike Ossmann gave his firetalk at Shmoocon titled GreatFET: A Preview, in which he explained how he bought the GoodFET project from Travis Goodspeed in a Las Vegas bar for $5. That was the beginning of the project that came to be known (humorously, at first) as GreatFET. At that time, GreatFET One was known as Azalea, and was still in the development stage. Three years and countless hours of engineering, development, and manufacturing effort later, we have completed the first production run. 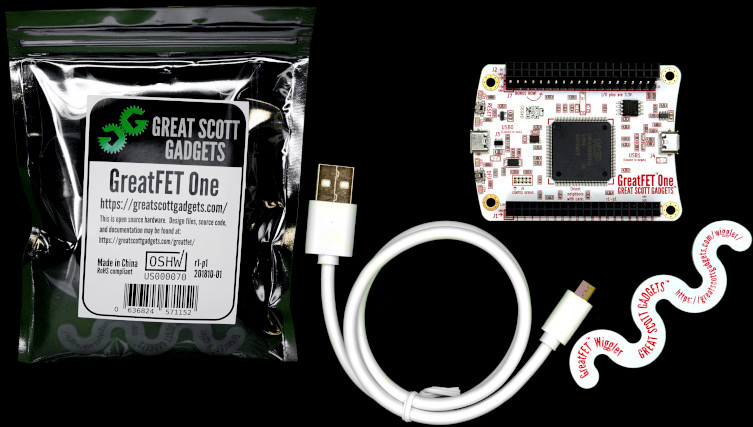 GreatFET One is a general purpose (and like all of our tools, open source) USB peripheral. When we say it’s general purpose, we mean that there are a whole lot of interesting things a hardware hacker, or maker, or tinkerer can customize it to do, especially through the addition of add-on boards called neighbors. But you don’t need to add anything on to start using this versatile this tool; there is plenty of USB hackery to be accomplished with GreatFET One on its own. Check out what Kate Temkin has been up to over the last year or so!

Very soon, we will also start offering a clear acrylic case and Daffodil, a solderless breadboard neighbour. To learn more about the GreatFET project and to see which resellers are already stocking GreatFET One, visit the GreatFET One product page.